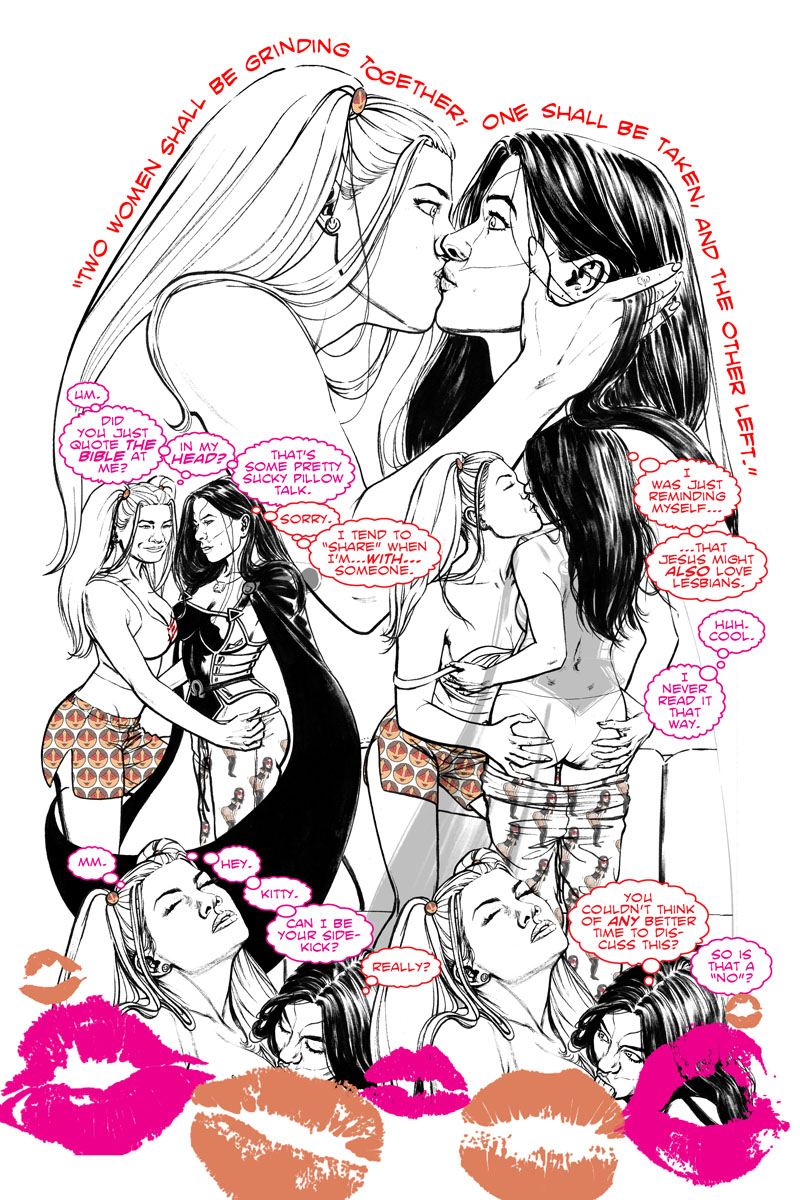 As stated in the comments above, this page's direction took a me a little by surprise as the scene played out very clothed in the script, so who knows?

Bwahaha! That's genius! That's so much better than my alt-text. You win: my admiration!*

*My admiration is completely worthless, but still, you're a winner.

Which of the following describes my feelings right?
[X] Turned on.
[ ] Not turned on.

Heh, that's a good reduction of some of the thinking that went into this.

I realized that Kathryn, feeling the warm glow of acceptance, wasn't nervous that Erica might want her, but rather hoping and leading.
edit delete reply
VanEzzania 19th Jan 2015, 1:33 PM

Now that you mentioned that, I think my characters Elliot and Saira might be in the same boat as Kathryn. Hoping that that they want each other.

I must admit the Bible quote did catch my eye, too. Its a nice touch, I dunno if that passage was referring to homosexuality exactly but still cool. I put a Bible passage in a page description at one point too, it was from the Song of Songs though.
edit delete reply
Caley Tibbittz Collopy 19th Jan 2015, 2:36 PM

Well, I'm no Bible expert, but according Christian blogger Ron Goetz, who wrote this article...

"Luke’s same-sex couples appear in Jesus’ discussion of a final separation which is often called the rapture. This is a separation of people who are acceptable to God and those who are not. As I said previously, whether or not you believe in this final separation, or whether or not you believe the Bible, doesn’t matter with regard to the significance of the passage. What is important is that Luke 17:34-35 teaches that sexually active gays and lesbians are not automatically consigned to perdition.

The second mention of same sex-couples is “two women grinding together.” A literal translation is “two [women] grinding on the same [place].” While the word “women” does not appear in the passage, we know that it is women who are grinding because the Greek word “grinding” (alEthousai) is a feminine participle.

"I know that most people concerned with these issues believe that Jesus never mentioned homosexuality. Well, technically, he didn’t, at least not as an abstract category. But he did mention four gays and lesbians–flesh and blood, living, breathing homosexuals. Jesus illustrates a key moment in “God’s Countdown to Judgment” by using as his examples 1) two men in one bed and 2) two women grinding together 3) at night. And half of the gays and lesbians (one member from each of the couples) are acceptable to God. And from what I read, the lesbian couple is in the middle of making love. Thus, acceptability to God has nothing to do with their celibacy.

By clearly alluding to the Levitical prohibitions against male homosexuality, followed immediately with his declaration that “one shall be taken, and the other left,” Jesus declared his own acceptance of gays and lesbians, and that gays and lesbians are not automatically rejected by God."

...I know there are a lot of conservative Bible readers who would find this idea hard to believe, but it does seem very much in line with Jesus' message and example of love and acceptance.

edit delete reply
sigpig 21st Jan 2015, 9:28 AM
Tibbitz, again there is wonderful artwork in this comic. The first time I read it, I thought Kathryn's clothes teleported off. The second time I read it, I saw that you had made her armour and cloak transparent - a VERY nice technique. BTW, was it Jayde's touch that finally broke through Kathryn's self-imposed steel curtain of intimacy ("or into me I see"), because it certainly didn't seem like she was turned on at all by Erica's advances earlier.
edit delete reply
Caley Tibbittz Collopy 26th Jan 2015, 4:59 PM

Kathryn's armor magically appears or disappears at her mental command via her ring; she can "strip" without touching her clothes.

Kathryn has been fighting her own humanity for years, desperately trying not to feel anything. But Jayde cut right through that. Kathryn is bisexual and has been attracted to Erica for most of the story, but just showing (almost) no sign of it, because she's trying to convince herself that she doesn't want to connect to people, when of course she really does.
edit delete reply
Ron Goetz 21st Jan 2015, 3:45 PM
Tibbitz, thanks for looking at my blog, and for giving it the nice, attention-grabbing plug.
edit delete reply
Caley Tibbittz Collopy 26th Jan 2015, 5:00 PM

My pleasure. The Bible is an easy book for me to read but a hard book for me to understand. All the depth and symbolism of the passage you parsed in your blog was previously lost on me. You have my thanks for helping me see Jesus' intentions and meaning in a new light.
edit delete reply
Songgu Kwon 25th Jan 2015, 4:54 PM

Amen. The idea that a man could try to be an accepted progressive of his magnitude 2,000 years ago is much more interesting to me than whether or not he could walk on water.
edit delete reply
Post a Comment