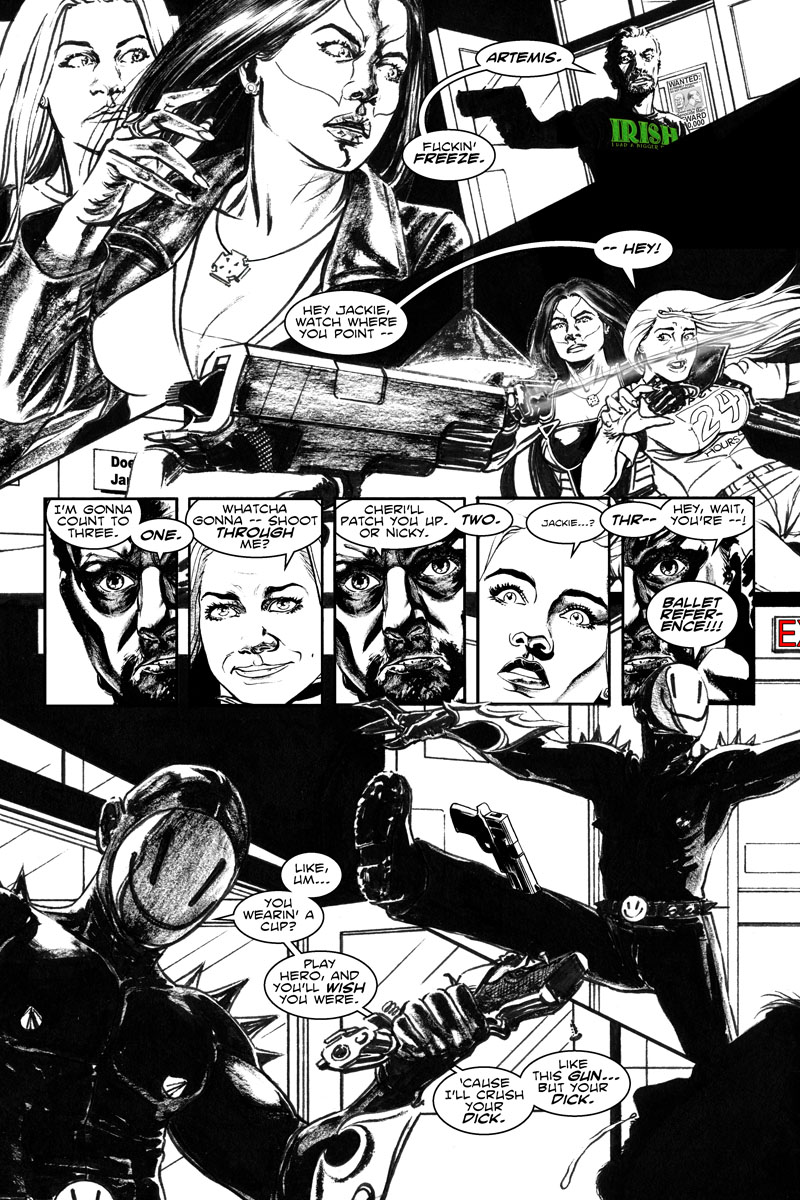 Oh man, I really really like the masked guy--were you calling him Smiley? What's his name? Also is he wearing a spandex suit because if so the deal is sealed and he is my permanent favourite. Gotta love the spike nipples. Is he a kinky guy or what?

But hey, I'm gonna throw a bit of criticism in here-- The action in your comic is really hard to follow sometimes. ;-; like I'm not sure what's going on , and that's on the majority of the pages--does smiley kick the door in, here? is he coming in from a window? I'm really not sure.
I think one of the reasons this page in particular is confusing because the backgrounds are oddly abstract and hard to distinguish. There are a lot of close ups and you hardly see the character's feet /full body, so its tough to tell where they are standing.

Also I might add that smiley guy looks like he's got two completely different body types in his two panels! In one, he's on the skinny side--in the bottom panel, he's hella ripped!

You're insanely talented, especially with your faces and figures. Everything is so photographic in its realism, it's absolutely splendid. and that lighting--how the hell do you do that so well? it must be witchcraft. you just might want to dedicate some time to working on your composition.

Yeah, it's honestly a failing how much backgrounds and most full-body shots bore me. I usually want to zoom in on the faces and hands, forgetting that scenery and full-body poses can also tell a story.

Not a cure, exactly, but color WILL help somewhat. I'm basically drawing a coloring book.

I know it has been a while since he posted, but I am going to partially agree with Jacarais. I was not sure exactly what happened in that last panel and had to read them a couple of times to figure it out. It almost felt like you skipped a panel (where mask boy enters the room and kicks the cop). We see the tail end of the kick, with the flying gun, and the silhouette of the cop's face with him presumably on the ground, but it feels like there should be another panel here to fill in the sequence. Or maybe just the cop seen being kicked in the 2nd to last panel.

I also agree that sometimes the 'camera' is in too tight and it is hard to tell what is going on.
edit delete reply
Caley Tibbittz Collopy 3rd Jan 2016, 5:53 PM

I don't know why I seem to often prefer a tight camera.

And this page will get an edit. I thought Jack's gun would connect everything together, but he effectively seems to "vanish" on Smiley's entrance. There's an easy solution: I didn't need to overlap Smiley's boot onto the final panel. And with his boot behind the gutter line, I could put Jack's arm in there as he falls, and the continuity would be improved mightily. So, I will do this ASAP.
edit delete reply
Steven-Vincent 3rd Jan 2016, 6:10 PM

The same is true with panel transitions. I tend to prefer to see all parts of the action. Not everyone does. Some people prefer bigger 'gaps' from panel to panel to let their imaginations fill in the missing pieces. Again all a matter of preference.

Ultimately you have to express your artistic vision. But just keep in mind that having large panel gaps and tight camera angles will confuse some people, causing them to be unable to tell what is happening on the page (like me, here and in a few other cases).
edit delete reply
Post a Comment